AE Techron amplifiers, like other amplifiers, use negative feedback to control gain and provide stability. AE Techron amplifiers also use this negative feedback in the IOC circuitry (see Figure 1). An op-amp senses the input signal and output signal at the same time. If there is any variation in the shape of the two waveforms, then the output does not truly represent the input. If the input and output signals do not match exactly, then the amplifier is producing distortion. 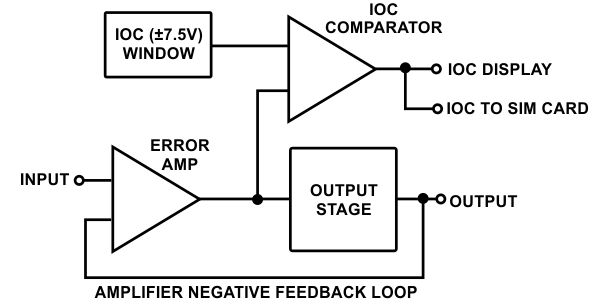 Figure 2 shows the undistorted input to the amplifier; the clipped output from the amplifier; and finally the output of the Error Amp (full square wave represents comparator output). The IOC circuit is sensitive to better than 0.05% distortion. 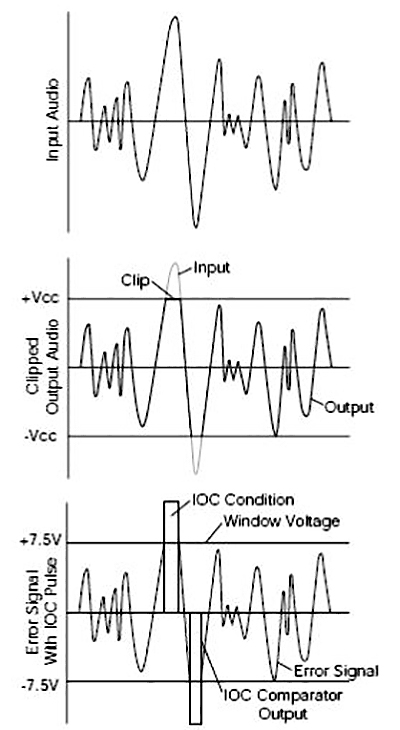 If an op-amp’s input and feedback signals do not have matching waveforms, the distortion causes a condition called “open loop gain.” Open loop gain means that the output of the amplifier will go to maximum power supply voltage on its output. Normally the output of the op-amp will be in proportion to the input, but if, for example, clipping occurs at a signal peak, the op-amp will produce a spike. Since a unique function of this op-amp stage is to sense such an error, it is commonly called an Error Amp.

The IOC circuit senses the output of the Error Amp, comparing it to fixed voltages. These fixed voltages act like a window. If the output of the Error Amp leaves its normal window of operation, the IOC circuit knows that the only reason is distortion. Once it is determined that an IOC condition (distortion) exists, it illuminates an indicator on the front panel of the amplifier.

How does IOC differ?

IOC is designed to report any form of distortion. IOC not only checks the waveform for distortion, but also reports input overload and even a protective action that mutes or shuts down an amplifier.

IOC functions accurately under a wide range of conditions including, varying load impedances, sagging or noisy mains power and over driven input signals. When the IOC indicator is off the amplifier is definitely operational and undistorted. IOC provides an on-line proof of performance. No other industrial amplifier manufacturer has IOC.

The IOC indicator will light to indicate distortion even before clipping is visible on a measurement scope. Occasional IOC events tell you the amp is reaching maximum output. The more frequently the IOC indicator lights up, the heavier the clipping.